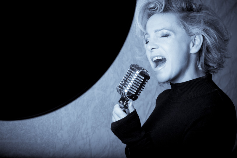 Florence Davis is a singer, songwriter, she is Andrée Davis Boyer’s daughter " Mamy SCOPITONE " ( precursor of the video clip in France ) and conductor, saxophonist Roby Davis’s.

She was born in Cap d' Antibes in a house designed as an eternal musical, parts, garden and surrounding areas were part of the film sets of her mother.

She grew up in the middle of singers, musicians and dancers and was soon attracted by the floodlights, at age of eighteen years old she starts her carreer singing in Olympia alongside Vangelis .

She took part of the création of the musicals " Starmania " and " Les Miserables" and has sung beside stars such as Charles Aznavour, Dizzy Gillespie, Claude François , Catherine Lara..

She has also gave her voice to the cinema, theater and advertising .

She currently produces herself on national and international stages with guitarist, composer Olivier Danloup.

"LES MISERABLES" with Robert Hossein, in the role of "Gavroche" at Palais des Sports of Paris

"NINE", of Federico Fellini at Folies Bergères in the role of "La Porca", casting and coaching. 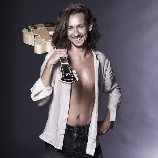 Olivier Danloup is a musician , composer , arranger , he began music by classical piano at the age 7 years.

Alongside his classical training, he studied guitar and other music styles, he gave his first concert with his band at the age of 14 years .

Interested in the knowledge of the instruments of the orchestra  for composition, he then studied bass, percussion and vocals.

Member of the SACEM, he studied musicology at the Sorbonne andat the C.I.M jazz improvisation and the conservatory of Yerres .

D.E.U.G musicology at the Sorbonne .

"THE MAN WITH THE IRON MASK " ( figurative )